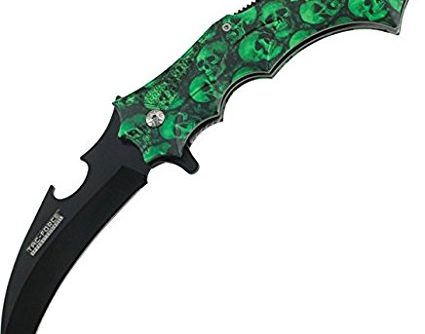 Knives have been in existence ever since the existence of man. They can be used to dress game, prepare food, for work, the great outdoors and many other purposes. Based on this broad categorization below are the different types of knives:

This is a middle Asian knife weighted at the front. They are great for chopping tasks. Large kukris knives can be used to cut down tree branches since they have a more downward power.  Find out more about kukris.

Used by those in the woods for bushcraft purposes.

Everyone knows the legendary bowie knife.  It’s iconic, it’s sexy, you’ve got to love it.

Also known as butterfly knives, these are Philippines traditional work knives. They allow the user to open the knife single handedly. They are mostly used for recreation as their flipping action is fun.

These are knives used by hunters to gut game. They are painted in camouflage a times

This is a long and heavy knife used to cut limbs, coconuts and tress. It can be used in the kitchen and also to gather firewood. They are very popular and vary according to regions they come from.  There are many different types of machetes.

These are small pocket size knives that people carry around in their pockets. They have blades that fold into the handles.

These are knives used outdoors. Some of them have compartments where one can store survival gear such as a whistle, small reflective devices or a fire starter.  Find out more about survival knives.

A neck knife is a knife that hangs around your neck for easy access.

My favorite historical blade is the seax.  It’s just a spectacular specimen.

Also known as leathermans or gerbers, this knife combines several tools into one. They have pliers, openers, screwdrivers etc.

A specialty knife to skin animals.

General outdoor knives which have a “Scandinavian” edge.

The most famous Scandinavian knife is the Puukko.

Light and strong.  Check out my in depth article on the combat knife.

This is a hybrid between a brass knuckles and a bayonet. It allows one to slash, punch and stab with a single tool. They were mostly used during WWI.

These are knives attached to the front of rifles. They give soldiers a sword like rifle to thrust with. They are not very good for slashing as most damage it can bring is from thrusting. It was mostly used by the British army when they were fighting Afghanistan rebel forces. They took zero causality.

A dagger attached to your boot.  Check out my boot knife guide.

The traditional Japanese knife which in modern times has changed significantly.  Check out my Tanto knife guide.

Can be used to punch. Check out my Push dagger article.

These are modern day fighting knives that have also been designed to do other utility roles.

You open the knife to a certain point before the opening mechanism will do the rest of the work for you.  Check out the best assisted opening knife.

These are a range of throwing knives. They are normally shortened and circular in shape.

This is a very popular sport. The knives are balanced and not sharp however they have sharp points.

This knife is also known as a cook’s knife. It is used for almost every job in the kitchen. It is good for cutting, chopping, dicing and slicing. It has a gentle slope so that one could rock it back and forth during chopping. They are non-serrated.

If you are not a vegetarian, this is the second basic kitchen knife you should be having. It looks like the chef’s knife but a bit smaller. It is used to remove fish filet, meat from bones and also cut up meat chunks. Some people have been using this knife to chop vegetables because it gives them more control.

This knife is used by butchers to cut through bone and meat. It is very big with a tall blade. Its weight is meant to add power to the swings. Clever knife is great to tasks such as cutting through thick bones, cutting fish heads off and some people use its back side to mince garlic.

These knives are long and serrated designed to cut bread without having to force it down. Unlike when using normal knives to cut bread, the bread knife cuts bread without squishing it and producing a lot of crumbs.

This is a small knife with a blade approximately 3-4 inches. It is used to prepare vegetable, fruits, and garnish. The knife is very light and can fit easily in the hand.

This knife can be automatic or mechanical. It is normally long and serrated. It is used to carve turkeys, breasts and roasts. It is the least used knife in the kitchen.

Besides kitchen knives, there are other types of knives used around the house or on the job site. They include;

These are very sharp knives with sturdy and heat resistant handles. The handles go into a sturdy sheath which has a strap for attachment to the leg. They are mostly used underwater.

This is a knife used in medicine during surgery. The knife is made of high carbon steel and is very sharp.

These knives are used to do detailed cuts in arts. They are also popularly used in architect to make miniature models.

The knives are insulated to protect a user from electrical shock. They look like a pocket knives

And those are all the major types of knives!